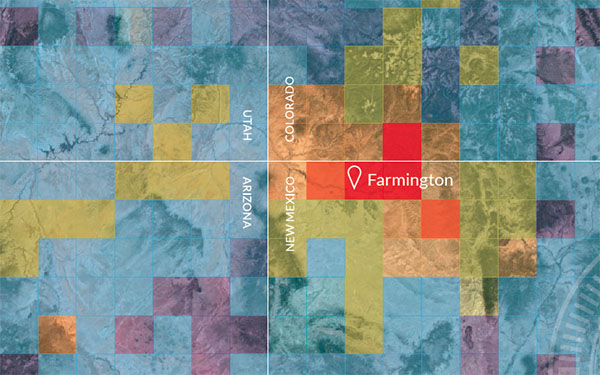 CAVU and the Rio Grande Chapter of the Sierra Club recently created a successful partnership conducting overflights and producing a short video highlighting major areas of pollution from methane gas leaks in northwestern New Mexico’s San Juan Valley. Following on the heels of this collaboration and CAVU’s dedication to climate change initiatives, we are now committed to creating an outreach campaign that will continue to put pressure on local, state and national agencies to stop the leaking of this valuable but toxic gas.

New Mexico’s San Juan Basin is scarred by tens of thousands of oil and gas rigs that are responsible for the 2,500 square-mile methane cloud hovering over the region. This “hot spot,” roughly the size of Delaware, was first discovered by satellite imagery in 2003 and is the largest concentration of methane in the United States. It is the #1 contributor to climate change in New Mexico and must be stopped.

Help us launch a new campaign to let our leaders know that leaking methane is harming our public health, our environment and our economy. We need you to help us make some noise. Get involved and donate now: thrive@cavu.org.

How much do you know about Methane?

Above image: Illustration demonstrates hotspot of methane anomalies in the Four Corners.